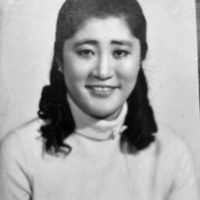 Cha-Sun was born August 31, 1937, in Wŏnsan (元山津), Kangwŏn Province, along the eastern side of the Korean Peninsula. She was born during the waning years of the occupation of Korea by the Empire of Japan, and was the youngest of 8 children. In Korea, it’s customary for children to inherit the name of their father and retain this name even in marriage. It’s also customary to list the last name first, then the first-name (which is always in two-parts). Her father, Mun Chong-Ho (문종호), and her mother Kim Kae-Sun (김 캐선), both lived through the Japanese occupation from 1910 - 1945.

After the end of the Japanese occupation in 1945, Korea was plunged into a civil war that divided the nation into the Democratic People's Republic of Korea (North Korea), and the Republic of Korea (South Korea). When she was 11 years old, Cha-Sun’s family fled North Korea on foot during one of the coldest winters recorded in Korean history. The family fled to Seoul, South Korea, and settled there peacefully until the invasion of South Korea by North Korean forces on June 25, 1950. During the invasion of Seoul on June 28th, Cha-Sun’s mother Kae-Sun was taken by North Korean soldiers. Her mother was never seen again.

Amidst tragedy, Cha-Sun still excelled in school, winning awards for her calligraphy, accolades for her skills at volleyball, and the love of many friends she’d meet through the years. In the aftermath of the Korean Civil War, Cha-Sun settled into work at Camp Humphrey as a waitress. U.S. Army Infantry Commander Colonel Frederick W. Best said in his letter of recommendation for her that, “(Cha-Sun’s) warm, outgoing personality … has been the subject of favorable comment by numerous visitors.” Colonel Best noted that she contributed to the promotion and enhancement of good relations between Koreans and Americans in South Korea.

Mun Cha-Sun married Donald J. Rutherford on May 9th, 1973 and moved to Carson City, California with him, becoming the mother to 3 step-children and 1 son. The family lived in California and Georgia before settling in Long Beach, Washington. Cha-Sun helped manage Double R. Amusements for most of her life on the Long Beach Peninsula. She was also heavily involved in her church and the broader community.

Cha-Sun loved flowers, gardening, cooking, knitting, sewing, travelling and fashion. She was an avid reader, and was fluent in reading and writing in Korean (Hangul) and English, in addition to speaking some Japanese. Cha-Sun is survived by her husband Donald, her second-eldest sister Mun Pong-Sun (문 퐁선), four step-children, Lee, Annette, Mark and Randal, two children, Fred Chong (종호) and his sister Chong-Hua (청화), 7 grandchildren, and 2 great-grandchildren. She is also survived by the numerous friends around the world she made in her life who, like her family, loved her smile.

Cha-Sun requested no funeral or services.

To order memorial trees or send flowers to the family in memory of Cha Sun Rutherford, please visit our flower store.