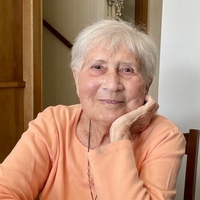 It is a truth universally acknowledged that a strong, intelligent, beautiful, and loving woman in possession of a large family will be missed terribly by them when she passes from this earth. This paraphrase, borrowed from a favorite author, could not be more accurate for beloved wife, mother, grandmother, and friend, Char Sutherland. Born April 25th, 1929, in Cherokee, Iowa to parents Calvin and Bernadine (Crapser) Flickinger, Charlene Yvonne Flickinger’s early years were touched by the stark realities of the Great Depression and then World War II. Her frugal upbringing meant that Char worked hard for everything she had and, after graduating high school in 1947, put herself through nursing school at the University of Iowa. It was there that she met the love of her life, a young medical student named Frederick Richard (F.R.) Sutherland. The two were married in a blizzard on December 15, 1951, and, when their travel plans had to be abandoned due to the weather, shared a hamburger and milkshake that evening—an anniversary tradition they would honor every one of their 65 years of marriage.

The young couple moved to Seattle, WA the following year for Dr. Sutherland to attend his residency. Char began work as an emergency department nurse at Harborview Medical Center and quickly gained a reputation for excellence, knowing each patient by name and able to provide complete reports on each from memory. She often described her relationship with F.R. at this time as “two ships passing in the night” as the two worked opposite shifts and frequently would only see each other in passing as they walked to and from the hospital and their small Capitol Hill apartment. However, it was not too long before they had the opportunity to move to North Bend, WA where they bought a home and Dr. Sutherland settled into private practice. They loved the community and the beauty of the Pacific Northwest, and enjoyed hiking, camping, and skiing with other couples who would become lifelong friends. They joined the North Bend Community Church where Char quickly became involved with several women’s groups and took an active role in volunteering throughout the community. It was in this idyllic valley where they chose to begin their family and went on to raise five children: Susan, David, Steven, Ann, and Thomas. She was the best mother there could ever be and devoted this period of her life to keeping everyone’s clothes ironed and shoes polished, cooking delicious meals, baking cookies, packing lunches, helping type history papers, shuttling the kids back and forth to school, Scouts, swimming lessons, and piano lessons, and never missing a sporting event, play, choir performance, or piano recital. When her husband became the team doctor for the Mt. Si High School football and wrestling teams, Char took on the role of team mother and frequently had the coaches and their wives over for delicious meals after games and matches. She had a knack for making people feel welcome and helped many young coaches’ and teachers’ wives settle into the community, introducing them to others and making them feel at home. Growing up during the Depression led her to show love through food and hospitality, and she taught others by her example of welcoming everyone with open arms, offering food and love without reservation. She hosted many dinners for her friends as well, often followed by entertaining rounds of pinochle, a game she continued to enjoy playing for all her years.

After her children left for college, Char returned to work as an RN with the Seattle Public Health System and spent the next 20 years caring for other young families and their children.

In 1990, Char and her husband moved to one of their favorite vacation homes in Long Beach, WA, where two of their children and six of their grandchildren ended up living as well. Char once again established herself with her church family in joining the Ocean Beach Presbyterian Church where she became active in many groups such as Modern Travelers, the Women’s Association, and book clubs, and became a cornerstone in providing goods for the annual holiday bazaars. Although ostensibly retired, Char maintained a busy schedule, going to the gym regularly, caring for grandchildren and attending their school events, and traveling the world, including memorable trips to Australia, China, and Scotland. She shared her love of baking and cooking with her grandchildren, having tea parties with them when they were little and teaching them how to bake for their own as they grew older.

She loved the family cabin on Puget Sound and was never happier than when sitting in the sun on the deck of what they called the “Bay House,” reading a favorite book, listening to the gulls’ cry, keeping track of the ships sailing by and watching the waves roll in. After her husband’s passing in 2017, Char felt especially close to him at the Bay and spent as much time as possible there over the last few years. She often commented how blessed she was that her children, their spouses and all her grandchildren got along so well, that they were not just family, but were all friends. They all truly seemed to enjoy one another’s company and wanted to spend time together. It seems from our perspective that we are the lucky ones, to have had her as a living example of how to live, love and give. She will be forever missed by the extended family she leaves behind including her children Sue (Sutherland) and Jeff Freese, David and Sheryl Sutherland, Steven and Debbie Sutherland, Ann (Sutherland) and Dan Davis, and Thomas and Garnette Sutherland, as well as her grandchildren: Kyle Sutherland, Jared Sutherland, Bradley Sutherland, Kathryn (Freese) Arland, Kristina Freese, Todd Sutherland, Tyler Davis, Ryan Sutherland, Kelly (Freese) Spall, Decker Davis, Owen Sutherland, Corbin Sutherland, and Evan Sutherland and her great grandson, Steven James Sutherland. Although her warmth, humor, and quiet strength will never be replaced, the spirit of compassion and hospitality she instilled in all of us will live on. And we can have the comfort of knowing she is back by her beloved husband’s side and keeping a watchful eye on us all as she enjoys a fresh-baked cookie and sips a hot cup of tea.

As was her nature, Char gave to many organizations. In lieu of flowers, the family requests that any memorial contributions simply be made to your favorite charity in her name. At this time, no public memorial service is planned for the immediate future, for health, safety, and travel concerns. At the same time, for anyone who cares to share remembrances, stories and recollections of times with Char, the family has set up an email for that purpose and would love to hear them: [email protected] or mail to PO Box 816 Long Beach, WA 98631.

To order memorial trees or send flowers to the family in memory of Charlene Yvonne Sutherland, please visit our flower store.