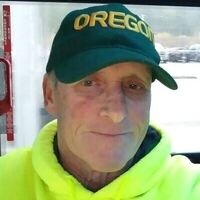 David Leeland Wiegardt was born September 8th, 1953 in Ilwaco Washington to Leeland and Virginia Wiegardt. David was the second oldest of four. David was a fun-loving adventurer. He loved to cook and travel. Most days you could catch him walking or riding his bike through Long Beach and waving to cars. He would stop and talk to everyone along the way to see how their day was. Unless of course it was football season, then you could find him at LBT rooting on his beloved Ducks.

David graduated from high school in Ilwaco and went to Clark College for Culinary Arts. After graduation he moved back to work at the family business. He was a truck driver for Wiegardt Brothers Inc until his retirement in 2001.

David was preceded in death by his Parents Leeland and Vigina, and two siblings Laurie and Bill. He is survived by his daughter Terry Jimenez, and brother Fritz.

Graveside services will be held on May 11th at 1:00pm at the Ocean Park Cemetery.

To order memorial trees or send flowers to the family in memory of David Leeland Wiegardt, please visit our flower store.