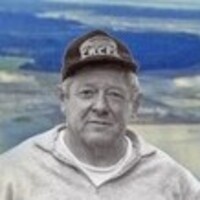 Neil Richard Sheldon (Dick) 87 of Nahcotta, Washington passed away peacefully on May 20, 2022. He was with family and holding his wife’s hand when he passed.

Dick was born January 21, 1935 to Roy and Ione (Houk) Sheldon at Riverview Hospital in Raymond, Washington.

Dick spent most of his 87 years living in Pacific County in Ocean Park, Nahcotta, and for a short time in East Raymond. He also lived in Portland and Bremerton for brief periods as a child, so his dad could receive medical care. He attended Ocean Park School and graduated from Ilwaco High School. He then attended Grays Harbor College where he played football. He’d been offered a scholarship to the UW, but all they wanted him to do was kick and he wanted to play. While at Ilwaco High, he served as Student Body President, and was in the Glee Club Quartet. He helped form a group of students to install the poles by hand that provided lighting for the Ilwaco Athletic Field for many years. He played several sports, but was a standout in football significantly due to his Uncle Ed (Bull) Tenoski’s encouragement and training. His team was undefeated during his time at Ilwaco High. He liked to recall how Uncle Ed would send him into canyons hunting, and how that really conditioned him. Working in the oyster and fishing industries also helped develop his high level of physical stamina.

Dick married his wife and love of his life of almost 70 years, Ruthie Holway, on September 4th, 1952. He set out to support his growing family, and held many jobs. He helped salvage logs out of the rivers for lumber. He tended bar at Arts (Docs) Tavern. He worked for several Oyster Farms and began commercial fishing in the 1950s on his boat, "The Tula". He was a lineman for the PUD, obtaining his journeyman certification. In 1966, he and wife, Ruthie, purchased the family oyster business, Northern Oyster Company, from her parents, Ted and Virginia Holway, which they operated for 40 years. They resurrected the original home of Northern Oyster at the cannery in Oysterville, which had been closed and needed a lot of repairs. Dick spent countless nights after the crew went home trying to keep the cannery operating. Dick and Ruthie formed a partnership with Dick’s mother Ione and stepfather Doc Watson to build the Oysterman seafood market on the beach hill in Ocean Park. In the early 1970’s, times were tough in the shellfish business due significantly to government meddling that allowed foreign product to be dumped into US markets. This about destroyed the local shellfish industry for many years. To assure the farm would remain in the family, Dick and Ruthie expanded the business into commercial fishing and purchased the troller "Twenty Grand". Dick fished this boat for the next 20 years fishing crab, tuna, and salmon from California to Alaska. Dick also built a fish buying station at the Port in Nahcotta in the early 1970s, using a box off a beer truck as the original building. He later turned this over to Roy and Yoko Sheldon who operated it for many years. Sister Yvonne continues to help operate the station to this day. After years of laying out a preliminary design, a naval architect was enlisted to design the combination vessel “The Northern”. Dick had always envisioned a vessel that could be used in the shallow draft waters of Willapa Bay, and also in the tough ocean fisheries out of the Columbia River, two very different operating environments requiring different vessel design characteristics. To date it remains the only vessel on the west coast capable of not only oystering, but also navigating the tough conditions of the Pacific Ocean. It was the first such vessel built by Edwing Boat in Chinook, which since that time has produced many of the modern-day commercial vessels you see all over the west coast now.

Dick’s initiation into several fisheries such as Tuna were tough times, but his work ethic made him a successful fisherman for many years. His sons, Donald, Rodger, and Brian, fished with him and learned many life lessons as they grew into young men. With Ruthie on shore keeping the home fires burning, it truly was the epidemy of a small family business. After his retirement from commercial fishing in 2004, Dick purchased a 40’ trawler in LaConner and sailed it from there to Ilwaco by himself. He fitted the boat for recreational fishing but operated it more like a commercial vessel. He renamed the boat the “Ione” after his mother, and spent many tides with is grandkids, family, and friends fishing tuna, salmon, crab, etc. out of Ilwaco.

Dick was well known for his involvement in community and industry affairs and helped create and served as the initial President of the Columbia River Crab Fisherman’s Association. He spent years traveling to Olympia to work on policies that would assure fisheries were sustained, often times being at odds with those who simply desired to over exploit these fisheries for short term gain. He served on many Committees, and was a leader on many fronts with the overall goal of sustaining environmental integrity and balance necessary to support nature and his community. He served on the Board of the Willapa-Grays Harbor Oyster Growers Association for many years and led the fight to keep Willapa Bay water quality pristine. This led to so many efforts it’s about impossible to list them all. He was a volunteer fire fighter for 32 years and helped build what is now Fire District-1 serving the North Beach Peninsula and Seaview. He helped recruit many younger volunteers to support an aging volunteer program. He served as the Chairmen and a founding member of the Pacific County Flood Control Advisory Board which was focused on addressing flooding issues on the Peninsula without draining wetlands and aquifer recharge areas. He donated many pounds of Dungeness to the Sports Boosters annual crab feed. Some of his more notable efforts included his work to prevent a development that would have drained Skating Lake into the bay so homes could be built within the drained wetlands. He also spent years working on a solution for the Burrowing Shrimp expansion in Willapa and Grays Harbor using the “lightest touch on the environment” approach. He drove the effort to eradicate Spartina eventually becoming a member of the “Gang of 4” who are to be credited with finally getting responsible resource managers to seriously address that issue. In the end, the Spartina eradication effort is recognized as the most successful marine invasive species program in the US. Even up to his passing he was following the current European Green Crab explosion and offering suggestions on how to address that invasive species. He kept a bucket with a few crab so he could monitor them at home. During all this time Dick designed, funded, and built many specialized pieces of equipment to try and pursue sensible management of invasive and pest species, many times being blocked by senseless agency and political entities more interested in being in charge than addressing environment issues. His focus on environmental affairs was always based on his saying that “take care of the Bay and it will take care of you”. He never put his personal needs ahead of that philosophy, and even that put him at odds with some with a shorter term quick-buck mentality.

While Dick was dedicated in many areas of service to his community, his greatest commitment was to family. He loved about all kids and was famous for his Root Beer float making ability. He always made sure even the youngest kids felt special and would literally light up when kids would visit. He made sure Santa found his way to visit for many years with his first visit to deliver a tricycle to his youngest sister-in-law Katherine in Oysterville.

He loved his grandkids and put a lot of effort into following their schooling and sports. He taught his grandkids many hunting, fishing, and basic life skills. Even when he was dealing with leukemia he got to sporting and other events as best he could. He was raised in a time when his extended family helped greatly to reduce the struggle his immediate family faced when he was a youth. He never forgot those struggles and had many great family stories about all his relatives. He helped navigate many of the common struggles families go thorough in order to keep his family together. At the same time, he had little tolerance for bad and irrational behavior and would be direct in letting family, or about anyone else, know that they were out of line. He and Ruthie’s efforts to arrange many trips to Hawaii, Lake Chelan, etc. were his way of assuring that even though his family was spreading out geographically, the younger ones would all be close. He and Ruthie also traveled to places like Mexico, Branson, Reno, etc.

He was preceded in death by his parents and an infant son Kenneth Allen.

A service will be held Friday May 27th, 2022 at Penttila’s Chapel by the Sea in Long Beach Washington at 1 PM followed by a burial at Ocean Park cemetery, and a reception at the Ocean Park Community Church at 26709 Vernon Avenue, Ocean Park, WA 98640.

Public viewing will be from 10 to 12 before the service.  Donations can be made to the Ocean Park Cemetery or the Pacific County Humane Society.

To order memorial trees or send flowers to the family in memory of Dick Sheldon, please visit our flower store.