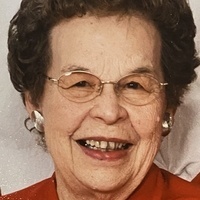 E. Margaret Main passed peacefully on March 5, 2021 at the age of 96. She was born at home in Flint, Michigan on February 1, 1925 to Charles and Esther Johnson, who had both immigrated from Sweden. She had five older brothers who proceeded her in death and is survived by her precious younger sister, Helen Hobson. She grew up in a small home in Flint. She had no bedroom and slept on the living room couch with all her things kept in one drawer. She experienced both the Great Depression and World War II in her lifetime. Those experiences led to her great love of her country and her strong belief of the value of saving and not wasting.

A girlfriend introduced her as a penpal to Manuel Main while he was still in the Army Air Corps. He had grown up just a few blocks from her but they had never met. Her first letter to him included a photo of her in a striped T-shirt that prompted his same day reply and his sign off of “very interested, M.L. Main.” They had their first date at a Billy Graham Crusade in a small church in Flint and that led to a marriage in 1946 that spanned 68 years and yielded three children.

Margaret and Manuel moved to California in 1949. Their first home was in a 16-foot trailer in San Leandro with their baby daughter, Nanci. It was a challenging time for Margaret and when they bought their home in Castro Valley in 1950, she walked from room to room with boundless joy. Their street had 18 new homes on a cul-de-sac, all purchased by young families, and that added up to 28 children playing and going through school together. She formed lifelong friendships from this chapter in her life and several friends still stayed in touch.

She was a stellar homemaker and mother. She canned, baked profusely, sewed her and her children’s clothes, held family gatherings every Sunday and was a fierce mama bear for her children. When she baked bread she would come to the back patio door with warm slices dripping with butter and pass them out to the salivating neighborhood children. As adults they would share that memory as one of the cherished ones of their childhood. Her daughter, Nanci, (former owner of nationally recognized Ark Restaurant), credits her mother’s baking for instilling her love of the art.

Margaret was a 30-plus year member of the TOPS club for weight control and formed strong, supportive friendships there that continued even after she relocated. Upon moving to Ocean Park, she became the oldest new member of the Peninsula Moose Lodge and was very proud of her title as “Matriarch” and being acknowledged in their national magazine.

She loved nature and some of her happiest and most relaxing times were spent with Manuel in their camper in the beautiful state parks of California. She had an inherited love of flowers and gardens and bouquets she received always lasted longer because she misted them and talked to them.

She was extremely proud of her Swedish heritage and so loved telling how her parents came over to this country and made a life for themselves despite all the hardships of limited education and knowledge of English.

Margaret was a woman who practiced her faith both in words and deeds. She had a list of prayer requests that she looked to each day and she loved singing hymns. Her favorite hymn was “I Come to the Garden Alone” (that was the last song she sang with her daughter before she left this world.) She was dedicated to sending cards for every occasion to her friends and family and would often say that this was her ministry. Her cards touched the hearts of hundreds of people in her lifetime.

She was a passionate sentimentalist and knew the story behind all the special things she had displayed on her walls and saved in special boxes with notes that gave the story behind each item. They were a connection to her deep love of family and friends.

Coffee was a sacred beverage in her world. She had coffee pots for groups from two to 30 and delighted in sharing a “Skol” with her cup raised high.

Margaret loved all dogs. She was delighted by the dogs that visited her at Golden Sands and smiled from ear to ear while she gave them limitless treats.

In 2016 she relocated to Golden Sands Assisted Living in Ocean Park, Washington to be near to her devoted daughter, Nanci Main. She was much loved by the staff and residents there for her quick wit, boundless humor and big smile. Several staff even named their babies after her. She loved the firemen and women at Fire District #1 for the many times they helped her with the stairs to visit her daughter’s home.

During the covid shutdown, she became the matriarch for a small group of Nanci’s friends. She enjoyed their love gifts of Costco hotdogs and Dylan’s Cottage Bakery maple bars and driving around in Nanci’s small truck to visit through the window. Even as her health handed her more challenges, she had humor and insights that delighted and inspired all who came into her sphere. She had become clear in recent years that she was ready to meet her maker and join Manuel in heaven but God had more for her to do. Finally her work on earth was done and this beloved mother and friend flew away and started her new career as a guardian angel to many.

Margaret’s favorite sayings were “God’s Hand Was in It’ and “I love you soooo much.” Both of those reflected a life of love and faith that touched all who knew and loved her.

To order memorial trees or send flowers to the family in memory of E. Margaret Main, please visit our flower store.