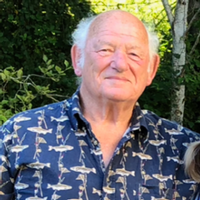 Edgar H. “Corky” Wilson, 82, a life long resident of Pacific county, died in Ilwaco on May 10, 2019. One of five children born to Harry and Pearl (Church) Wilson, he was born in Long Beach on May 21, 1936. His mother's sister was the midwife. His father Harry was a commercial fisherman who later was the original owner of Chinook Custom Cannery.

As a youth the family lived at a home near the mouth of the Naselle River. One of Corky's memories was getting cookies from the soldiers stationed nearby during World War II. The family moved to Chinook where he attended Chinook elementary and Ilwaco High School. As a Fisherman, Corky played varsity football (he broke his collar bone in one game), lettered in track, and was a standout varsity basketball player for 4 years and captain of his senior year team. He holds the school game record of 42 points in the “old” I.H.S. Gym. Corky was scouted by the National Basketball Association but his wife persuaded him to forgo the opportunity, knowing she might “loose” him...so he stayed local!

He and Virginia Driscoll were married December 17, 1955 in Ocean Park, their first home being in Chinook. Corky became a shake sawyer and heand his wife moved to South Bend where they raised their family and Corky worked for several mills during the next 30 years.  He co-owned and operated Hansen & Wilson Logging with Don Hansen in the early 1970s and operated Corky's Cedar Products in South Bend until the mid 1980s, became a maintenance man for several lumber operations, and finally retired as a “Cat” operator for Lindstrom & Son in Chinook. Returning to his roots in Chinook, he retired there in 1998.

Corky was a member of the Raymond Assembly of God and later attended in Astoria. He served as Port of Chinook Commissioner, and his pride and joy was serving as Project Manager/Organizer for the restoration of the Chinook Gym and School, he being a very active member of the Friends of Chinook School.

A avid hunter (including buffalo), fisherman (he and his father were pioneers in the development of the King crab fishery in Alaska), Corky was a very skilled and talented wood craftsman. He took pride in his numerous projects, from bird houses to model lighthouses, too of late, grandfather clocks. He was particularly proud of having rebuilt a historic two-horse buggy in Montana, the results of which are displayed in a museum in Helena, Montana. A dedicated family, man, Corky had a nick name for everyone.

Celebration of Life Service will be Thursday, May 16, 2019, "High Noon" at the Chinook School Gym. A reception follows. Graveside rites will be at Ilwaco Cemetery. His casket will be open Wednesday, 12 Noon to 5 PM at Penttila's Chapel by The Sea, Long Beach. Memorials are requested to Friends of Chinook School. His guestbook is available at www.penttilaschapel.com.

If you have a story about Corky that you would like to share with the family please email it to "[email protected]".

To order memorial trees or send flowers to the family in memory of Edgar H. "Corky" Wilson, please visit our flower store.