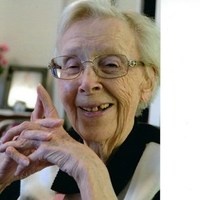 Esther Lillian Hansen departed this earth and went to be with the Lord on September 2, 2019 at Columbia Memorial Hospital in Astoria, Oregon with her three sons and daughter-in-law at her side. She was just 22 days shy of her 103rd birthday.

Esther was born on her family's homestead on Brush Creek near Winnett, Montana on September 24, 1916 to Norwegian immigrants Sivert O. and Elida A. Elde (Anderson). As a girl she attended the one room Brush Creek school. As a teenager she helped take care of the cattle on the homestead and spent a lot of time on horseback. Ever since she had a lifelong love of horses.

In 1935 she graduated from Winnett High School, and because of the severe drought conditions in Montana, the family moved to the little fishing village of Chinook, Washington where her mother's four brothers were fishermen.

At this time Esther attended business college in Spokane, Washington and Astoria. She went to work at Chinook Packing Co. where she met Walt Hansen, a native Chinooker and the love of her life. They were married in 1939 and from then on Chinook was their home. She next worked for the National Bank of Commerce in Ilwaco. Between 1940 and 1945 their three sons were born and she became a full time homemaker.

After the boys were grown, Walt and Esther built River's End Campground in Chinook, which they operated for 24 years before retiring. They enjoyed very much meeting all the different people who stayed at the campground.

In retirement they traveled to the Southwest, especially Arizona and Palm Springs, for a couple of months in winter. They also made three trips to Hawaii with family, a cruise to Alaska with Walt's only remaining brother and his two sisters, and two very memorable vacations with family to Esther's homestead birthplace in Montana.

In 1989 Esther and Walt celebrated their 50th wedding anniversary in Chinook. Nearly all their friends and family attended. In 1999 they celebrated their 60th, the year before Walt passed away.

Esther enjoyed gardening and usually had a large vegetable garden when she was able. She canned vegetables and fruits, made bread and butter pickles, and lots of jams and jellies. At Christmastime she would bake several kinds of Norwegian cookies and lefse which everyone enjoyed. She liked to grow flowers and was very good at bringing dying plants back to life. She also did a lot of crocheting and made beautiful afghans for all the members of her family. They will always be treasured memories of her.

She was very good natured and usually always had a smile. Even as life became more challenging she still managed a smile.

She is survived by her brother Monrad “Bud” Elde of Woodinville, WA; her three sons Larry of Seaview, WA, Don (Sue) of Montesano, WA and Arne of Chinook, WA; Don and Sue's son Chris (Kiersten) and their children Karsten and Elle of Olympia, Don and Sue's daughter Kim and her son Kaesen of Tempe, AZ; Arne's daughter Nicole (Greg) and their children Caden, Noelle, Kingston and Luciana of Tualatin, OR, Arne's daughter Jennifer and her daughters Mariah and Kasenya of Chandler, AZ; also numerous nieces and nephews and their families.

She is preceded in death by her husband Walter Hansen in 2000, her parents Sivert and Elide Elde, brother Adolph Elde and sister Evelyn Jossi.

She will be remembered as a wonderful, caring and dedicated mother, grandmother and great-grandmother. For her the two most important parts of her life were her deep devotion of her Christian faith, and her total love for her family. We, her family, loved her completely and will miss her very, very much.

In lieu of flowers, donations may be made in her memory to the Naselle Assembly of God Memorial Fund, PO Box 26, Naselle, WA 98638, Friends of Chinook School, PO Box 243, Chinook, WA, or the charity of one's choice.

Funeral service will be held at 1:00 PM Saturday, September 14th at Naselle Assembly of God, 278 Knappton Rd in Naselle. A reception will follow at the church. After, a procession to Ilwaco Cmetery for concluding graveside services. Her guestbook is available at www.penttilaschapel.com.

To order memorial trees or send flowers to the family in memory of Esther L. Hansen, please visit our flower store.