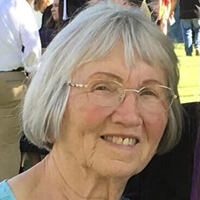 Gertrude “Louise” Kemmer died May 18, 2022 at the age of 84 in Ilwaco, Washington. She was born September 4, 1937, in Freiburg, Germany. Louise met her first husband, George Gradt while he was stationed in Germany. They were married and had their first son George while in Germany. They moved to the Long Beach Peninsula when Louise was 21. She and George had two more boys together, John and Thomas. Louise and George divorced and she later met Danny Kemmer while she was working at Red’s Tavern in Ilwaco. Louise and Danny married and had two boys, Chuck and Larry. They bought a home in Ilwaco and she has resided there for the last 54 years.Louise worked for Ocean Beach School District as an aide in the early 1980s and then went onto work at the Chinook Packing Company. She retired from Chinook Packing Company after many years of success and accomplishments. When she retired she was the manager of the crab room. In her younger days she would volunteer at the Eagles on Sunday mornings as well as the museum in Ilwaco. In her spare time you could find her in the kitchen baking. Everything shemade was from scratch, nothing came from a box. She was well known for annual Christmas cookies and the snoopy cake she would make for her grandchildren’s birthdays. Every hunting season you could count on her making a fresh pot of clam chowder and grilled cheese and listening intently on the adventures of the day’s hunt. Everyone was welcome at her kitchen table, no one left hungry or without leftovers. She found great joy in making dolls and numerous keepsakes made out of stained glass. She enjoyed tending to her flowers and keeping her lawn in pristine condition. Even into her late 70s, she would never allow anyoneelse to mow her lawn, she did that herself.Louise loved deeply and she was an amazing, kind, generous woman. Her impact on all of our lives will forever be cherished. She is survived by her five children. George (Sandy) Gradt, John (Sharon) Gradt, Thomas (Sue) Gradt, Chuck (Kelli) Kemmer, and Larry (Michelle) Kemmer; niece Heidi (George) Garofalo, as well as all 13 of her grandchildren and three great-grandchildren. Louise died peacefully at her home in Ilwaco surrounded by her family. A celebration of life will take place at a later date

To order memorial trees or send flowers to the family in memory of Gertrude Louise Kemmer, please visit our flower store.