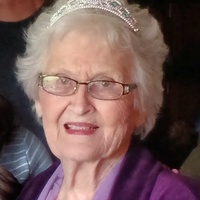 Helen was born in Johnson, Minnesota to Carl and Amanda Rixe. When she was eight years
old, she and her family moved to Salmon Creek, Washington. She received her grade school
education at St. John's Lutheran Parochial School, then went on to Vancouver High School.
Upon completion of her schooling, Helen worked for Luepke Florist in Vancouver for three
years. She carried that love of flowers with her her whole life, growing her own beautiful
roses and gladly sharing them with her friends and neighbors. In her earlier years, her yard
and flowers were the subject of much admiration.

She married Harvey Reese in Vancouver, WA in February 1947, and later that year, they
established their home in Long Beach, WA. She and Harvey had four children together.
Harvey Reese was a commercial fisherman by trade, and in 1956, lost his life to the sea.
His fishing vessel, the Doris J, sank in a freak storm while on a tuna fishing trip.
In 1957, Helen married Alfred Bailey of Deep River, WA. A daughter was born to
them in 1958.

Helen and Al had a new home built on their property in 1963. It was framed entirely with
lumber that had washed ashore when two lumber barges broke apart in heavy seas off the
coast of the Long Beach peninsula. Helen mused many, many times during her life that, “The
ocean took my first husband, but it also gave me a new home.” Up until six months before
her passing, she drove down the Long Beach approach every day to marvel at the beauty of
the sea.

Helen starting working for the Ocean Beach School District in 1971, as a cook in the
Hilltop School kitchen. A few years later, when the new high school was built, she was the
Head Baker and was well known for her delicious cinnamon rolls.

After losing her husband, Al, to lung cancer in 1996, Helen did dog-sitting, in her own home,
for a number of her friends. She had always had a soft spot in her heart for dogs, as she and
Al had raised and loved numerous black labradors over the years.

Helen enjoyed many hobbies throughout her long life. Bike rides, beach-combing, gardening,
baking for her family; even bowling on two leagues into her early 80's! Sturgeon fishing was
her favorite though, and countless happy memories were made fishing with family and
friends on their boat, the Ada Lu.

Her passing has left such an enormous hole in our lives; but the love she gave us, and
taught us to share, will see us through. Her favorite saying was, “Cast your bread upon the
waters. It will come back to you.” It's up to us now to continue her legacy of love and
generosity. She was surrounded by her loving family, in her home, at the time of her
passing.

She was preceded in death by one son, Ronald Reese, who she lost to brain cancer in 1988.
After losing Ron, she became very close with her nephew, Jim Hutchison, who was Ron's
cousin and closest friend. Jimmy had been a constant source of love and support to Helen
until her passing.

Family, friends, and anyone whose life was touched by our mother is invited to a
Celebration of Life Party to be held at Helen's home at 2502 Washington Avenue North, Long
Beach on Saturday, December 8, 2018. (1:00 PM – 3:00 PM) Stop in for a snack and share a
memory with us!

In lieu of flowers, our family asks that donations be made to His Supper Table Thrift Store at
911 Pacific Avenue, Long Beach.

To order memorial trees or send flowers to the family in memory of Helen R. Bailey, please visit our flower store.