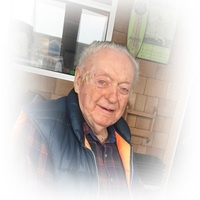 A native of the small farming community of Wisner, Nebraska, he was born May 15, 1921, the son of James E. and Ceacle (Chaudoin) Donnelly.  He graduated from Rosalie (Nebraska) High School.  Following high school, he moved to Portland and on August 17, 1942 he was inducted into the US Army.  Buck served in the South Pacific until honorably discharged on December 29, 1945.  He returned to Rosalie, Nebraska following his military service.

Buck married Pearl Orander in November of 1947 and their first home was in Long Beach.   Buck was a automotive mechanic and in 1955 established Peninsula Auto Body which he operated until 1990 when he retired.  He was an active member of BPOE #1937, Ocean Park Eagles, Ocean Park Moose and local posts of both the American Legion and Veterans of Foreign Wars.  He was proud of is military service and participated in the annual Loyalty Day Parade for many years.  Buck was also a very faithful member of St. Mary's Parish in Seaview.  Woodworking, reading, traveling, and painting (artwork) were favorite pastimes.  He was also a member of the NRA.  For many years Buck was also a member of the Peninsula Saddle Club and for many rodeos he operated the roping shutes.

Following the death of his wife Pearl, he married Patricia McCoy.  She survives residing in Vancouver where they resided to be near family.  Also surviving are two grandchildren; and four great-grandchildren.  He was preceded in death by brothers Lawrence, Leo and Louis; and daughter Anne Dennison, his son Michael and sister..

Buck had requested a graveside service and burial next to Pearl.  That was held Thursday, February 27, 2020, at Lone Fir Cemetery, Long Beach.  .

His guest book is available at www.penttilaschapel.com.

To order memorial trees or send flowers to the family in memory of James Edward "Buck" Donnelly, please visit our flower store.