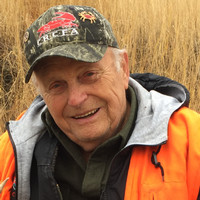 Kenneth R. “Ken” Greenfield Sr., 86, passed peacefully with his family at his side in Portland on February 22, 2019. Born in Lynwood, California on July 30, 1932 he was the only son and youngest of four children born to Richard and Lucile (Rearick) Greenfield.

His father was a metallurgist and steel melter, employed at several west coast factories and when Ken was 13 the family moved to Salmon Creek, Washington just north of Vancouver. There the family bought Paus Pickle Co. and Ken began his life-long love of fishing in Salmon Creek and the Lewis River.

Ken attended Vancouver High School with the class of 1950. Ken joined the U.S. Navy in November of 1950 and was honorably discharged four years later. He served during the Korean Conflict aboard the USS Hollister (DD-788) and had many memories of his wartime experiences.

Returning to Vancouver, Ken attended Clark College. He was employed as foreman at a state fish hatchery from 1957 until 1965 when he moved to Chinook and began his career as a commercial fisherman, locally and in Alaska. Ken loved building boats: “Miss Cindy”, “Julie Lynn”, “IC Straight”, “Ptarmigan” and “Jami Lynn”. He was a member of Alaska AIFMA, CRFPU Columbia River, Salmon For All, N.R.A. and Columbia River Crab Fishery Association. In addition he had great interest in Friends of Chinook School, was a member of Veterans of Foreign Wars, served as Port of Chinook Commissioner for 20 years, and member of Ocean Beach Presbyterian Church where he served as elder and rose garden assistant.

Ken was an avid hunter and fisherman, especially with sons Robbie and Dick and their hunting excursions to Montana and Pullman, Washington are cherished memories. When fishing in Bristol Bay, Alaska he enjoyed “mug ups” coffee for many years and morning coffee with “the guys” at the Port of Chinook office. He also enjoyed watching sports and was a loving and dedicated family man.

To order memorial trees or send flowers to the family in memory of Ken Greenfield, please visit our flower store.