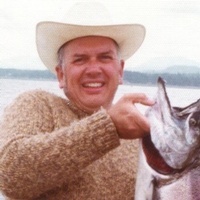 OCEAN PARK — Kenton Gifford Waechter, 88, of Ocean Park, passed away at his home surrounded by his loving family on November 13, 2018.

Ken was born on August 17, 1930 in Washington Court House, Ohio to Edwin and Eva (Hane) Waechter.

He served in the United States Air Force, which began his love of flying and he was a small aircraft pilot. He loved to fish and would fly his plane to many of his fishing adventures in the U.S. and Canada.

Ken was a retired OB-GYN who had a practice with his wife, Elaine, for several decades in Grass Valley, California before moving to Ocean Park in 2002.

Ken is survived by his wife of 44 years, Elaine ; a son, Kurt of Citrus Heights, California; his step-daughter, Cinde of Ocean Park; grandson, Joshua Burgess of Baltimore; Maryland; great-granddaughters, Kelly and Emily Burgess of Fredrick, MD and step-son, Greg of Sacramento, California.

He is preceded in death by his parents, sister, Arlynn and son, Craig.

Grateful thanks to Dr. Fabiano and LaDonna at Ocean Beach Medical Group, Jim and the staff at Ocean Park Pharmacy, Sherri Meuchel and Katie Fuller at Harbors Home Health, Stephanie Williamson, Brian Jameson and many others.

A Memorial Service will be held on December 9, at 12:30 p.m., at Ocean Beach Presbyterian Church, 5000 N Place in Seaview, Washington.

To order memorial trees or send flowers to the family in memory of Kenton Waechter M.D., please visit our flower store.