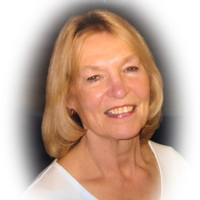 Former Peninsula resident Linda M. Stedman, 72, died at her Rockaway Beach, Oregon residence on October 3, 2019 surrounded by her loving family. The daughter of Lyle and Mary Rosburg, she was born April 14, 1947 in Sioux City, Iowa.

Linda grew up on a farm eight miles outside of Mapleton, Iowa, population around 900. She went to grade school and high school in Mapleton, Iowa. She was the Monona County REC Queen in 1964. Linda was the oldest of eight children in a Roman Catholic household. Linda and her brother Jim were born, then several years later, six more children arrived. Linda was a second mother to the younger children. She helped wash clothes with a wringer washer and hang them out on a line, helped raise chickens, and walked the bean fields.

Linda went to Iowa State University in Ames, Iowa where she met and married Terry Stoffer. They had one son, Alan. Linda worked to put Terry through school and later the family moved to Des Moines, Iowa. Linda always had a career and later moved to Chicago, working in sales and marketing. There she met John Stedman. When they married, Linda moved to the Pacific Northwest living in Bremerton, WA and later Long Beach, WA. They liked to travel to visit family in their RV. Linda loved the water and the ocean with John teaching her how to sail on their sailboat. Linda was crushed when John succumbed to brain cancer. She attended St. Mary’s Parish in Seaview praying for John’s healing, becoming very active in the church.

When life became hard, she met Robert Grundy and together they built a life in the Tillamook County area. Bob taught Linda how to fish and hunt, and she loved this new life. They went clamming and crabbing along the coast. She made the best smoked salmon. They enjoyed camping in their motorhome at Olallie Lake and numerous other areas. As Linda got sick, Bob took care of her, traveling weekly and sometimes daily to appointments. They spent every minute together, visiting the ocean often and enjoying the sunsets.

She liked to read novels, especially John Grisham. She especially liked to decorate her home and make it picture perfect. When her son Alan passed she focused on her grandson Jacob and dearly loved to spend time with him. Distance kept them apart, but she especially loved his visits, now in the last few months. She liked to take him special places where he could remember their time together; deep sea fishing, riding the zip line and crabbing. Everyone will remember Linda in their own special way.

Recitation of The Rosary will be held Saturday, October 12, 2019, 11:00 AM at Penttila's Chapel by the Sea in Long Beach. Funeral Mass will be celebrated that afternoon beginning at 1:00 PM at St. Mary's Church in Seaview. Following a luncheon at the church, graveside rites will follow at Ilwaco Cemetery. Those wishing may make memorials in her memory to either the McGowan Church Restoration Fund or the American Cancer Society. Her guestbook is available at www.penttilaschapel.com.

To order memorial trees or send flowers to the family in memory of Linda M. Stedman, please visit our flower store.