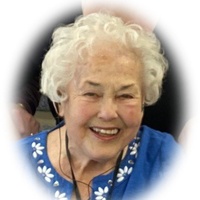 Margaret E. “Maggie” Sheridan, 90, died in Klipsan Beach, Washington on December 28, 2019. A native of Baker, Oregon, she was born there on November 12, 1929, the middle child of Richmond and Lenore (Sturgil) Eccles.

Initially she attended St. Francis Catholic School in Baker before transferring to North Baker Elementary, graduating from North Baker High School. In 1950 she graduated from the Emanuel Hospital School of Nursing in Portland and became a registered nurse. It was while working at Emanuel she met a sailor who was visiting a buddy. Maggie and Alexander “Bud” Sheridan were married April 21, 1951 and their first home was in Glenwood, Washington.

Six year later the couple purchased a home in Portland, on N. Webster Street. Maggie continued her nursing career as a OB/GYN nurse at Bess Kaiser Hospital in Portland where she excelled in caring for newborns and their mothers. Moving to Ilwaco in 1975, Maggie worked at Ocean Beach Hospital for several years until retirement.

She and Bud built a home on Sandridge Road. Several years after Bud's death Maggie moved to Golden Sands in Klipsan Beach. As a child Maggie enjoyed picking huckleberries and trout fishing. Later she found enjoyment in gardening vegetables and flowers, her apple trees and blueberries, and baking. She loved to share plates of cookies and fudge with neighbors, and friends in California, and Christmas was always a special time with family.

Celebration of her life will be Saturday, January 11, 2020, 2:00 PM at Penttila's Chapel by The Sea, Long Beach. Private committal at Lone Fir Cemetery. Her guestbook is available at www.penttilaschapel.com.

To order memorial trees or send flowers to the family in memory of Margaret E. Sheridan, please visit our flower store.