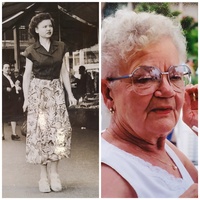 Marie Marsh, August 1, 1929 -March 4, 2020
Marian Marsh, 90, died in her home in Long Beach on March 4, 2020. The daughter of William and
Henrietta (Putnam) Meyer, she was born in Beaver Creek, Minnesota on August 1, 1929.
Marian, her mother and father moved to Bremerton, Washington in 1943 where her father found work
in the Navel Shipyard during WW2. While attending school in Bremerton she made several, close,
lifetime friends. Marian met Wellington Marsh Jr. in 1950 in Seattle when her and her girl friends subleased
a house from Jr. and his college buddies. Marian and Jr. were married in Long Beach, March
20,1951.

After Jr. graduated from the University of Washington in 1952 they moved to Long Beach where
Marian spent the rest of her life. Marian and Jr owned and operated Marsh Cafe with Harvey and
Gertie Marsh (Jr.’s brother and his wife). In 1965 Marian and Jr. bought Marsh’s Free Museum from
Wellington and Harriet Marsh (Jr.’s parents).

Marian enjoyed bowling, clam digging, glass ball hunting, salmon fishing, bunco, and traveling with
family and friends. And oh yes, dancing to the sounds of the big bands with the love of her life, Jr.
They made a beautiful sight on the dance floor. She rarely missed morning coffee at the bakery,
sometimes with grandchildren in tow looking for doughnuts. An afternoon coffee with friends was also
a daily routine at what is now the North Beach Tavern.

Marian loved her family. Her grandchildren have wonderful memories of sleep over nights, sitting in
her lap while she read storybooks to them, her gold dance shoes, going to Chuck's for after dinner ice
cream and her driving them around the peninsula in her big white Buick.

Service will be held at Penttila’s Chapel By The Sea at a later date after the current health concerns.

She has been buried next to Junior at Lone Fir Cemetery.

Memorials are requested to either the South Pacific County Humane Society or the Ilwaco High School Scholarship Fund in care of Penttila's Chapel, PO Box 417, Long Beach 98631.  Her guestbook is available at www.penttilaschapel.com.

To order memorial trees or send flowers to the family in memory of Marian Marie Marsh, please visit our flower store.