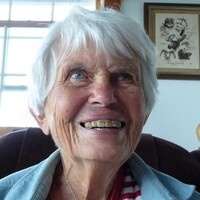 Longtime Peninsula resident Marjorie Cochrane died at home surrounded by family, in Nahcotta, Washington, March 12, 2022. She was 97. Margie was born to Karen Mathea Jensen and Harold Jester July 5, 1924, in Caldwell, Idaho. She graduated from Caldwell High School and studied journalism at the College of Idaho and University of Oregon, graduating from the U of O. She married her high school sweetheart, Jack Fletcher, a mining geologist. The couple added two daughters, Becky and Ann, to the family. They resided in Idaho’s remote mining camps, where Jack worked until his untimely death in a mining accident, in 1956. Margie returned to Caldwell with her daughters, where she attended the College of Idaho and earned a teaching certificate in English. At the college, she met Byron Cochrane, an architect and WWII veteran. The two married and moved to McCall, Idaho, where Byron worked for the US Forest Service designing fire lookouts in the Payette National Forest.  Three more children were born to the family: Cathy, Nancy, and Andrew. Margie raised the children while also working from home as a reporter for the Associated Press and for the McCall-Donnelly Star newspaper. In 1970 the family relocated to Meridian. Margie went back to school, earning a degree in library science. She worked as a school librarian until 1975, when the family moved to Eagle River, Alaska. There Margie served as chief reporter for the Chugiak-Eagle River Star newspaper and immersed herself in the study of Alaska history. She subsequently wrote three history books: “Between Two Rivers: the growth of Chugiak-Eagle River, Alaska,” “Three Dogs, Two Mules & a Reindeer,” and “Bold Women in Alaska History.”

Margie was a skilled violinist and played in both the Idaho and Alaska Symphony Orchestras. In 1984 Margie and Byron moved to Kailua Kona, Hawaii, where they grew coffee commercially and Margie continued to write. They returned to the mainland in 1993 and settled in Nahcotta, where Margie joined a string quartet, sang with a local choir—the Bayside Singers—and enjoyed activities with the Willapa Bay Audubon Society.

Margie was preceded in death by Jack Fletcher (1956), infant daughters Cynthia Lou Fletcher and Pamela Kay Fletcher, grandson Robert Ericson (2014), and husband Byron Cochrane (2008). She is survived by five children and their spouses, 17 grandchildren, and 18 great grandchildren. She was dearly loved and admired and is deeply missed by all who knew her.

A remembrance service was held March 19 at the Ocean Park United Methodist Church, where Margie was a member.

To order memorial trees or send flowers to the family in memory of Marjorie Lucille Cochrane, please visit our flower store.