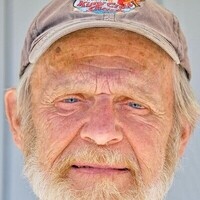 Born in Klamath Falls, Oregon he grew up in Portland, attending Chapman School and Benson Polytechnic. His lifelong love of gardening began when he won an award at 7 years old for his Victory Garden during World War II. He was proud to have served in the Army and National Guard as a young man.

Mike and D'Lorah raised their children in a wonderful old farmhouse in Clark County, Washington that Mike kept warm and cozy by splitting literally tons of wood. He lovingly tended an enormous vegetable garden, from which he and D’lorah canned a years’ worth of food every summer.

In their retirement years, Mike and D’Lorah built a home in Klipsan Beach, Washington. For years Mike tried valiantly to grow great tomatoes on his misty land before turning his skills to beautiful flowers and abundant root crops. Just over the dunes from the beach, Mike said they lived in paradise. He filled his days gardening, feeding the birds, watching the deer, looking at the vast sea and sky, and enjoying plenty of quiet time.

Mike loved every dog he ever met and they loved him right back. His closest friend was always his dog. He could be an impossibly grumpy old salt but also generous, funny, and incredibly charismatic. He told great stories, leaving it to the listener to determine how much he had embellished. We will remember him for delicious meals, summer barbecues, extravagant Christmases, and the many fine values he imparted to us. May he rest in love and peace.

No service is planned. If you wish to honor Mike, he would have been most pleased by a donation to South Pacific County Humane Society: www.beachpets.com.

To order memorial trees or send flowers to the family in memory of Michael Anthony Moretz, please visit our flower store.