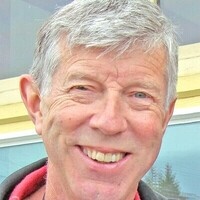 Michael Dan Williams, beloved husband, father, grandfather, and great-grandfather, Mike Williams passed away peacefully late Sunday, June 28, 2020, after a long battle with cancer, in the arms of his loving family and in the town that he cherished.

Born May 29, 1942, Mike grew up on “Williams Hill” in Ilwaco – the same hill where his father was born and raised and where Mike raised his two daughters.

He graduated from Ilwaco High School in May 1960 and maintained deep lifelong friendships with many of his classmates. He attended Gonzaga University, Lower Columbia Junior College, and Eastern Washington State College before returning to Ilwaco to work at Strand Insurance with his cousin Tim Williams.

He joined Telephone Utilities in 1966 and worked at the company (and its successor Pacific Telecomm) for nearly 30 years, with a short break in which he worked for Pacific County PUD in 1981-82.

He married his Ilwaco High School classmate Gayle Pursley in 1968, and the couple raised two daughters, Melinda and Hillary. Although Mike and Gayle divorced in 1980, they remained friends and continued to share family gatherings.

He met Jeanene Slejeski in 1988, and their love affair was a source of joy and fulfillment for more than 30 years. Two kindred spirits, they married on the beach in Hawaii in 1994, and traveled frequently to Alaska, Hawaii, Mexico and throughout the West Coast. Over the years, they lived on the Long Beach Peninsula, Vancouver, and Alaska, but they were always in close contact with family and friends.

Mike served in the U.S. National Guard in the late 1960s and early 1970s, and liked to joke that as an Army cook he could take out an entire battalion single-handedly. He was a popular Master of Ceremonies for the annual Loyalty Day Banquet and Flag Day events, and could be found at the Ilwaco Cemetery every Memorial Day, honoring local veterans by mowing the grass and placing flowers on their graves. Mike served as secretary of the Ilwaco Cemetery Association for a number of years.

Mike was the living embodiment of Winston Churchill’s famous quote, “We make a living by what we get, but we make a life by what we give.” He served 25 years as a volunteer fireman in both Ilwaco and Clark County, Washington. As a Catholic Community Services volunteer, he provided transportation, delivered groceries, and visited home-bound seniors. He was active in the local Elks club and ran the local youth Hoop Shoot competition for years. He donated blood more than 400 times over 50 years, earning a lifetime achievement award from the American Red Cross. While in Vancouver, Mike and Jeanene spent many evenings at Portland Emmanuel Hospital, holding babies who had been born with drug addictions or other special needs. He served on the boards of numerous community organizations, and in recent years he and Jeanene were active on the Reach Out Ministries Thrift Store Board and the historic restoration of St. Mary’s McGowan Church just outside of Chinook, Washington.

Mike never missed an opportunity to build and nurture connections with friends and family. He kept in frequent contact with his large and far-flung extended family and the friends he gathered wherever he went. Like his father before him, he was a great storyteller, a master practical joker and everyone’s favorite uncle, cousin, and friend. He should have owned stock in Hallmark with the number of birthday, anniversary, graduation, and just-thinking-of-you cards he sent.

He enjoyed just about every aspect of Peninsula life. He never missed an opportunity to dig a limit of razor clams, pick a few buckets of wild blackberries, or stop by the Cottage Bakery to visit with friends. He emceed countless community events and was a fixture for decades at local high school basketball and football games. In recent years, he took great pleasure in working the booth at the Mini-Golf course owned by his daughter and son-in-law, where he was so popular that people he’d only met once returned to ask for him by name. He found joy and human connection in every minute of every day.

No immediate gatherings are planned due to the COVID-19 emergency, though a funeral service and celebration of Mike’s life will be planned in the future. In lieu of flowers, the family suggests a donation in his name to the restoration of the historic St. Mary’s McGowan Church, one of the community projects Mike was working on at the time of his death. https://www.gofundme.com/f/st-mary039s-mcgowan-restoration-project.

To order memorial trees or send flowers to the family in memory of Mike D. Williams, please visit our flower store.