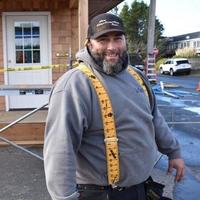 He was young when the family moved to the Long Beach Peninsula; he lived here 36 years. Ron graduated from Ilwaco High School, class of 1996. He met his future bride, Angela, in the library, and the high school sweethearts were married on May 22, 1999.

Ron operated his own business; he was the owner of Cox Construction.

He was a member of numerous summer softball leagues, the NRA and Fantasy Football. He loved quad riding and Christmas tree donations.

Family was everything to Ron. He would do anything within his means to make their lives a little easier.

Survivors include his wife, Angela; sons, Marcus, Trenton and Grady; his sister-in-law, Kala Duff, half-sister, Jonnie; brothers, Michael Lambert, half-brother, TJ Lamance, Gary Baker; and brother-in-law, Jeremy Goble; his nieces, Kaliana and Kiralyn Duff, and Brylie; nephews, Jensen Goble and Lukas Lambert; his grandma, Mary Lamance as well as so many aunts, uncles, cousins and close friends. He was preceded in death by his father, John Lamance and a sister Rene Paris.

A celebration of life was held on Nov. 9, in Ilwaco. His guestbook is available at www.penttilaschapel.com.

To order memorial trees or send flowers to the family in memory of Ron Cox, please visit our flower store.