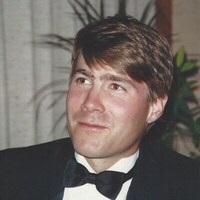 Beloved father, son and brother, Tom Evans, passed away unexpectedly at his home in Olympia, Washington on February 9, 2021.

Thomas Eldred (Tommy) Evans (Tommy) was born on September 16, 1967, in Honolulu, Hawaii, the youngest of three boys. He was a well-traveled little man, having lived in Hawaii, North Carolina, and Alaska, by the time he was five years old.

In 1973, after his parents’ divorce, the family moved to Ilwaco, Washington, where he was to receive all of his early schooling. Many of his fondest memories were of growing up on the Long Beach Peninsula. He explored its beaches and tidelands, dug clams, harvested cranberries, worked many odd jobs in the summer, hung out with like-minded friends, and never hesitated to marvel at its uniqueness.

He was a proud graduate of Ilwaco High School, class of 1985, where he formed lasting friendships. He went on to attend Western Washington University and graduated in 1991. He settled in Olympia, Washington where he raised his family. He has been employed for many years by the State of Washington, Department of Enterprise Services.

Tom was a prolific reader and a lifelong learner, who loved to share his thoughts with others. Those near to him will miss those long discussions! He touched many lives and will be deeply missed.

He is survived by his Mother and Stepfather, Kathy and David Aase of Long Beach, his incredible children, Matthew, Mark, David, and Catherine, and their mother, Diana, all of Olympia, brothers Rich (Ruth Ann) and Randy, of Long Beach, stepbrother Brian (Karen), stepsisters Mary Ann (Terry), Melissa (Brian), Donna (Merv), and their families and a Special Friend, Erly Dizon, of Olympia. There will be a “Celebration of Tom’s Life” at a later date.

To order memorial trees or send flowers to the family in memory of Thomas Eldred Evans, please visit our flower store.