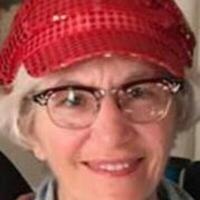 Vicki Jo Libby passed peacefully on October 29th, surrounded by her husband and sisters in Ocean Park, WA. Vicki was born August 21, 1946 in Corvallis, Oregon to Athol and Dorls Libby.

After graduating from Beaverton High School in 1964, Vicki worked at Meier & Frank in Portland, Oregon while attending nursing school at Portland Community and graduating with a Associate of Nursing degree in 1973. Vicki maintained her nursing license for 46 years. Her entire nursing career she was know as, “Nurse Lulu”, a nickname she picked up from cartoon drawings she created with healthcare workplace themes and humor.

Part of Vicki's career was spent in Sitka, Alaska working for the Federal Government with indigenous people. While in Alaska, Vicki pursued additional education and graduated from Sheldon Jackson College with a bachelors degree in Land Management in 1988. In addition to nursing, Vicki worked at the Alaska Raptor Center helping injured birds of prey heal and be reintroduced into the wild.

When Vicki moved to the peninsula in early 2003, she met her future husband Jonathan. Though retired, she maintained her nursing license and continued to help and serve. She regularly gave blood pressure checks at the Peninsula Senior Center. Over the years she also provided compassionate care to many friends and acquaintances who were ill or facing challenging health concerns.

Throughout her life Vicki was optimistic, adventurous, giving and kind. She loved to travel and fully embraced peninsula life. She was an avid clam digger, beach walker, and enjoyed many year round peninsula events. In short, Vicki made the most of each and every day.

A private family memorial will be held at a later time, in Jefferson, Oregon.

To her many friends, Vicki's fondest wish was to be remembered as a trusted friend and someone who found something to celebrate each day. Her kind words and good deeds are cherished by those who know and love her.

The family requests in lieu of flowers, please donate to a charity of your choice.

To order memorial trees or send flowers to the family in memory of Vicki Jo Libby, please visit our flower store.