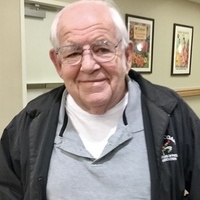 He went to Portland State University, wrestled for them for four years and earned a Bachelors Degree of Science. He wrestled two years for the Multnomah Athletic Club. At Oregon State University he earned a masters degree in Health Education.

He went to Vancouver and taught at Evergreen High School for four years. Virgil started the wrestling program at Evergreen.

Then moved to Astoria Tongue Point Job Corps, taught and was head wrestling coach. He also wrestled the students against Jr. colleges. For two years he ran the first tournaments between Clatsop Jr College and WA and OR Jr. Colleges. Lived there five years, then moved to Chinook for one year and taught at Naselle Youth Camp. And did drivers ed. classroom and Behind the Wheel.

Moved again to Long Beach 1971 to 2015. He taught at Ilwaco High School for 20 years taught P.E., health, ran Diversified Occupations, Head Vocational Education Director, Head Wrestling Coach, Drivers Education classroom and Behind Wheel. After retired he still did both of these for a total of 39 years of Drivers Ed.

He started and ran the North Coast Referees Association. He refereed 12 State of Oregon tournaments. Virgil was awarded the State of Washington Wrestling Coaches Joe Bobbit Contributors Award in 2007.

Virgil was in the Coast Guard Reserve for eight years. Also had a six man charter boat Captains License and would skipper in the summer when they needed him.

He enjoyed doing things with his two boys and also later with the grandsons. Also enjoyed clamming, yard work, driving on the beach in his different cars over the years, 55’ CJ3B Jeep, Dune Buggy, Suzuki Samari, micro truk (yes it is spelled that way) and a long time ago in Portland he had a Crosly and a candy apple red Messerschmidt.

Besides his wife Beverly of over 56 years his survivors include their son Craig; grandsons Chance and Zane; two brothers Dale (Bonnie), Eldon (Ardis). He was preceded in death by his son Marvin in 2004.

The Ocean Park United Methodist Church was his church (the little gray church by the sea). A memorial service was held at the church Dec. 21, 2019 and burial was at Lone Fir Cemetery in Long Beach. Memorials are suggested for the Dementia Society http://www.dementiasociety.org/

To order memorial trees or send flowers to the family in memory of Virgil L. Burger, please visit our flower store.