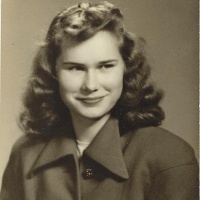 Rosburg resident Vivien E. Agee-Wirkkala, 89, died in Astoria on July 6, 2019. The daughter of Virgil and Nora (Mallgren) Purnell, she was born in Dayton, Washington on October 10, 1929. Vivien attended Dayton Elementary, Dayton High for a year, before graduating from Ellensburg High School in 1947. She attended Central Washington University in Ellensburg for four years.

In September of 1950 she married Richard Dean Agee and became a wife, and later mother to four children. With her family grown she returned and completed her education degree from Eastern Washington University in Cheney, graduating in 1967.

Vivien taught school in Washtucna, Washington from 1967 until 1971 when she moved to the Naselle area. She was a teacher for Naselle Junior and Senior High School and she filled in as needed at the Naselle Youth Camp until retirement. Following the death of Richard she married Edwin Wirkkala in Grays River in August of 1994.

Vivien enjoyed her family and various activities including sewing, oil painting, computer writing, hand crafts, her house plants, and her various four-legged friends over the years. She formerly attended the Community Congregational Church in Naselle and was currently attending Valley Bible Church in Rosburg.

Vivien is survived by her children Jennifer Agee, Stacey Agee, Lynette Agee and Mark Agee. Her husband Edwin Wirkkala survives as do his children Dianne Forberg, Jan Hager, Connie May, Susan Petreye and Steve Wirkkala; and numerous grand and great grandhildren. She was preceded in death by her sister Esther Messick and brother Merton Purnell.

Funeral service will be Saturday, July 13, 2019. 1:00 PM at Valley Bible Church in Rosburg with a reception following. Burial follows at Seal River Cemetery, Rosburg.  Her guestbook is available at www.penttilaschapel.com.

To order memorial trees or send flowers to the family in memory of Vivien E. Agee-Wirkkala, please visit our flower store.